CAREER TIMELINE OF THE BISMARCK
Compiled by José M. Rico 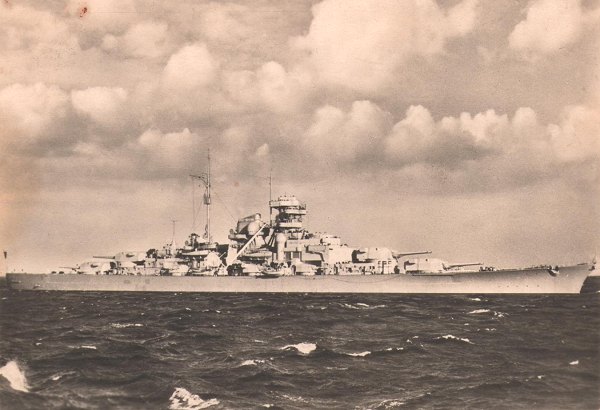 23 June 1940: Enters floating dry dock No. V-VI for a three week period where the three propellers and the MES magnetic system are installed.

24 August 1940: At 1230 the ship is officially commissioned at the Blohm & Voss Shipyard under Captain Ernst Lindemann. The battle flag is hoisted and the ship put into service with the Kriegsmarine.

15 September 1940: The Bismarck leaves Hamburg for the first time. At 1658 hours, while steaming down the Elbe, collides with the bow tug Atlantik but neither ship is damaged, and at 1902, the Bismarck anchors in Brunsbüttel roads. During the night of 15/16 September, while anchored, there is an air raid alarm in which the anti-aircraft battery expends 13 x 10.5 cm, 136 x 3.7 cm, and 191 x 2 cm projectiles. No success observed.

16-17 September 1940: The battleship passes through the Kiel Canal assisted by tugboats. At 1448 on the 17th, the Bismarck enters the Kiel-Holtenau sluice, leaves the Kiel Canal, and then comes alongside Scheerhafen, Kiel.

28 September 1940: Bismarck leaves Kiel escorted by the mine clearance vessel 13 until Cape Arkona, and then she arrives alone at Gotenhafen.

October-November 1940: Conducts trials in the Baltic Sea. While at Gotenhafen, the two 10.5 meter stereoscopic base rangefinders are installed above the foretop and after command posts. The four after 10.5 cm SK C/33 double mounts of the new C37 model are installed as well.

05 December 1940: Leaves the Baltic and sails back to Hamburg to complete her outfitting.

Late April 1941: Two new 2 cm Flak C/38 quadruple mounts are installed to both sides of the foremast above the searchlight platform.

05 May 1941: Adolf Hitler visits the Bismarck together with Field Marshal Wilhelm Keitel, the Chief of Fleet Admiral Günther Lütjens, and other personalities. The Führer stays aboard for four hours.

12 May 1941: Admiral Lütjens and the Fleet Staff embark in the Bismarck.

13 May 1941: Refuelling exercises at sea with the heavy cruiser Prinz Eugen.

14 May 1941: Exercises with the light cruiser Leipzig. As a result of these exercises, the 12-ton portside crane is disabled.

1200. Leaves the berth in Gotenhafen and anchors in the bay to embark supplies and fuel.

1300. Bismarck and Prinz Eugen are sighted in the Kattegat by the Swedish cruiser Gotland.

0800-0900. The German battle group enters the Korsfjord near Bergen.

1315. Sighted and photographed by a British Coastal Command Spitfire.

2000. Leaves the Korsfjord together with the Prinz Eugen and the three destroyers.

2030. Bismarck sights Norfolk and fires five main battery salvoes. No hits scored. The forward radar set (FuMO 23) is disabled due to the blast shock from the forward turrets. Shortly afterwards the Prinz Eugen passes the Bismarck and takes the lead.

2200. Reverses her course and tries to engage the Suffolk which realizes the Bismarck's manoeuvre and withdraws.

0552. Hood opens fire and the Battle of the Denmark Strait begins. Bismarck reports to Group North: "Am in a fight with two heavy units."

0555. Bismarck fires her first salvo at Hood followed shortly after by Prinz Eugen.

0556-0600. Bismarck is hit on the port side by three 35.6cm shells from the battleship Prince of Wales. One amidships under the armoured belt (section XIV), a second in her bows (section XXI), and the third one passes through a boat.

1814. Turns 180ş to starboard while the Prinz Eugen leaves the formation.

2056. Bismarck reports to Group West and Seekriegsleitung: "Shaking off contacts impossible due to enemy radar. Due to fuel [shortage] will proceed directly to Saint-Nazaire."

Midnight. Bismarck is attacked by eight Swordfish of the 825th Squadron (Lieutenant-Commander (A) Eugene Esmonde) from carrier Victorious. Bismarck's speed 27 knots. The battleship is hit by one 18 inch MK XII torpedo on the starboard side, amidships. The damage is insignificant, but the shock of the impact causes one casualty aboard: Oberbootsmann Kurt Kirchberg.

0131. Fires two salvoes against the Prince of Wales. No hits.

0153. Bismarck reports to Group West: "Torpedo hit of no significance."

0310. Turns to starboard and the British lose contact with her.

0912-0948. Bismarck reports to Group West and Seekriegsleitung: “Possession of radar equipment by opponent, effective range at least 35,000 meters, adversely affects to the highest degree the operations in the Atlantic. Ships were located in the Strait of Denmark in dense fog and were continuously tracked. Disengagement failed even in favourable weather conditions. Oil replenishment is generally no longer possible, if disengagement of opponent cannot be accomplished with higher speed. Running battle between 20,800 and 18,000 meters. Opponent Hood concentrates fire on Bismarck. After five minutes, Hood is destroyed by an explosion; thereafter, change of target to King George who then turns away in black smoke caused by definitively observed hits. He remains out of sight for several hours. Own munitions expenditure: 93 rounds. Later, King George took on the fight only at extreme distances. Bismarck received two hits from King George; of those one hit below the side armour belt at sections XIII-XIV. Hit in compartment XX-XXI impaired speed and caused a 1ş bow burying forward and destruction of oil cells. Release of Prinz Eugen possible by engagement of cruisers and battleship by Bismarck during fog. Own EM-2 [radar] instrument prone to failures, especially during firing.”

2047-2115. Attacked by 15 Swordfish of the 810th, 818th, and 820th Squadrons from Ark Royal. The Bismarck is hit by two (or three) 18 inch MK XII torpedoes. One torpedo (or two) hits the port side amidships, and another hits the stern in the starboard side. As a result of this attack both rudders jammed at 12ş to port.

2140. Bismarck reports to the High Command of the Navy (O.K.M.) and Group West: "Ship unable to manoeuvre. We will fight to the last shell. Long live the Führer."

2325. Bismarck reports to Group West: "Am surrounded by Renown and light forces."

2358. Bismarck reports: "To the Führer of the German Reich, Adolf Hitler: We shall fight to the last man with confidence in you, my Führer, and with rock-solid trust in Germany's victory!"

2359. Bismarck reports to Group West: “Ship is weaponry-wise and mechanically fully intact; however, it cannot be steered with the engines."

0217. Bismarck reports to Commander in Chief of the Navy (Grossadmiral Raeder): "Submitting application for awarding the Knight’s Cross to Korvettenkapitän Schneider for the sinking of Hood!"

0931. Turret "Cäsar" fires the last salvo and is put out of action. Main battery silenced.

Sometime about 1000. Demolition charges explode in the turbine room.