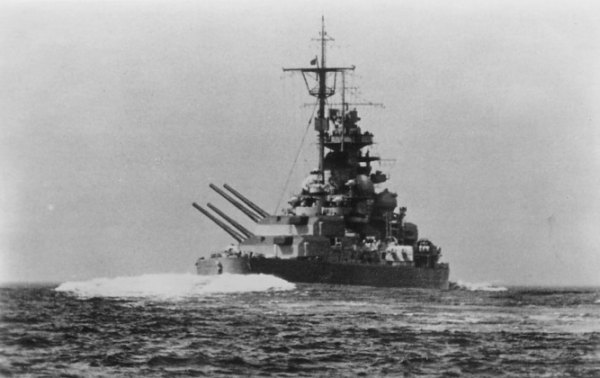 The battleship Tirpitz conducting trials in the Baltic Sea in the spring of 1941.

The Tirpitz, second and last battleship of the Bismarck class, was the largest warship built in Germany. She was commissioned on February 1941, and afterwards went to the Baltic to conduct sea trials. At the beginning of 1942, she was sent to Trondheim, Norway in order to repel a possible allied invasion, and to attack the Russia-bound Arctic convoys. As part of the "Fleet in being", her mere presence forced the Allies to maintain a considerable force in Scapa Flow that could have been otherwise employed in other theatres of operations. In July 1942, she was indirectly responsible for the destruction of convoy PQ-17 without firing a single shot. In September 1943, while anchored in KÕfjord/Altafjord, she was attacked by British midget submarines and put out of action for the first time. Later subjected to continuous aerial bombings, the Tirpitz was finally sunk off HÕk°y Island near Troms° on 12 November 1944 after being hit by 5.4-ton "Tallboy" bombs.

02 November 1936: Lay down on Slipway 2 at the Kriegsmarine Werft shipyard in Wilhelmshaven. Construction number S 128.

20 March 1941: Begins her trials in the Baltic with base in Gotenhafen.

05 May 1941: Adolf Hitler visits the Tirpitz in Gotenhafen.

22 May 1941: Leaves the Baltic and sails back to Kiel to complete her outfitting.

23-26 September 1941: As flagship of the "Baltic Fleet" under the command of Vizeadmiral Otto Ciliax, the Tirpitz remains off Aaland Island with the heavy cruiser Admiral Scheer, the light cruisers K÷ln, N³rnberg, Emden, Leipzig, destroyers Z25, Z26, Z27, and torpedo boats T2, T5, T8, T11, to prevent any sortie of the Soviet fleet based in Leningrad.

October 1941: While in Gotenhafen, the antiaircraft battery is increased. In addition two quadruple torpedo mounts are installed on the upper deck to each side of the ship amidships (section X).

16 January 1942: Arrives in Trondheim and anchors in the Fµttenfjord a subsidiary arm of the ┼senfjord.

30-31 January 1942: Seven British Stirlings of the No. 15 Squadron and nine Halifaxes of No. 76 Squadron, attempt to attack the Tirpitz in Fµttenfjord but fail to locate the battleship.

06 March 1942: At 1200 hours the Tirpitz casts off from Fµttenfjord and leaves Trondheim under the command of Vizeadmiral Otto Ciliax, together with the destroyers Z25, Hermann Schoemann, and Paul Jacobi, in order to intercept the British convoys QP8 (with 15 ships) and PQ12 (with 16 ships) in the Arctic. In the afternoon she is sighted off the coast by the British submarine Seawolf.

07 March 1942: At 1800 hours, the Russian steamer Ijora is torpedoed and sunk by the destroyer Friedrich Ihn.

08 March 1942: In the afternoon, Vizeadmiral Ciliax decides to cancel the operation and return to Trondheim.

09 March 1942: Shortly after 0900, while en route to Trondheim, the Tirpitz is attacked by 12 Albacore torpedo biplanes of the 817th and 832th Squadrons from carrier Victorious. The battleship successfully avoids all torpedoes and shoots down two Albacores. At 1957 hours in the evening she anchors in Bogen Bay near Narvik.

12 March 1942: Tirpitz weighs anchor at midnight and heads for Trondheim.

30-31 March 1942: 33 Halifax bombers attempt to attack the Tirpitz in Fµttenfjord without success. Six bombers are lost in the attack.

27-28 April 1942: Attacked by 29 Halifax and 11 Lancaster in Fµttenfjord without success. Five bombers are lost in the attack.

28-29 April 1942: Attacked again by 23 Halifax and 11 Lancaster in Fµttenfjord without success. This time two bombers are lost in the attack.

31 May 1942: At 1938 hours, the Commander-in-Chief of the Kriegsmarine, Grand Admiral Erich Raeder embarks and spends the night aboard. Grand Admiral's flag is hoisted.

02 July 1942: Operation R÷sselsprung. At 1800, the Tirpitz leaves Trondheim under the command of Admiral Otto Schniewind and sails North, together with the heavy cruiser Admiral Hipper, the destroyers Friedrich Ihn, Hans Lody, Karl Galster, Theodor Riedel and the torpedo boats T7 and T15. Their mission is to join in Altafjord with the battle group from Narvik under the command of Vizeadmiral Oskar Kummetz and comprised of the heavy cruisers L³tzow (ex-Deutschland) and Admiral Scheer, and the destroyers Z24, Z27, Z28, Z29, and Z30 to attack the convoy PQ17 with 36 merchantmen. During their voyage to Altafjord the destroyers Hans Lody, Karl Galster, and Theodor Riedel of the Tirpitz group run on to rocks and are discarded for the operation. The L³tzow also runs on to rocks and returns to Narvik.

08 July 1942: The Fleet enters the Ofotfjord and anchors in Bogen Bay near Narvik.

23 October 1942: Tirpitz departs Bogen and sails South to Trondheim for a refit.

24 February 1943: Captain Hans Meyer takes over command of the ship.

13 March 1943: Admiral Kummetz assumes command of the Task Force in Narvik, with Tirpitz as flagship.

23-24 March 1943: Operation Silesia. Tirpitz, Scharnhorst, L³tzow and six destroyers are transferred from Bogen Bay to Altafjord where they run trials until July.

09 September 1943: The German ships arrive safely at Altafjord and the Tirpitz anchors in KÕfjord.

22 September 1943: The Tirpitz is attacked by the British midget submarines X-5, X-6, and X-7 in KÕfjord. After passing through the protective torpedo nets, X-6 places two mines of two tons each under the battleship's keel, and X-7 another one. The three midget submarines are sunk but the damage sustained is important and the battleship is out of action for the next six months. As a result of this attack 1 man loses his life and 40 other are wounded.

12 February 1944: Attacked by four Soviet bombers in Altafjord without success. 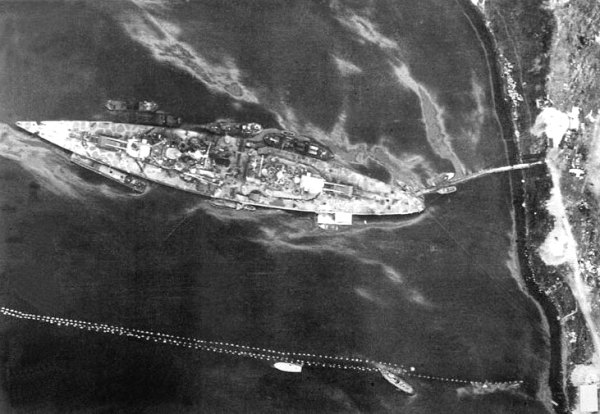 The Tirpitz in KÕfjord/Altafjord photographed by a British Mosquito on 12 July 1944.

22 August 1944: Attacked by 32 Barracudas from carriers Indefatigable, Furious, Formidable, Nabob, and Trumpeter with no success.

15 September 1944: Attacked by 27 Lancaster from Yagodnik near Archangel. Tirpitz is hit on the forecastle by a 5.4-ton "Tallboy" bomb. The damage is severe and the battleship is no longer seaworthy.

15 October 1944: After temporary repairs in the bow, the Tirpitz leaves KÕfjord/Altafjord and sails at 8 knots to Troms° where she anchors off HÕk°y Island to remain there as a floating battery.

29 October 1944: Attacked by 32 Lancaster of the 617th Dam Buster Squadron without success.

1948-1957: The wreck of the Tirpitz is broken up by British, Norwegian and German firms. 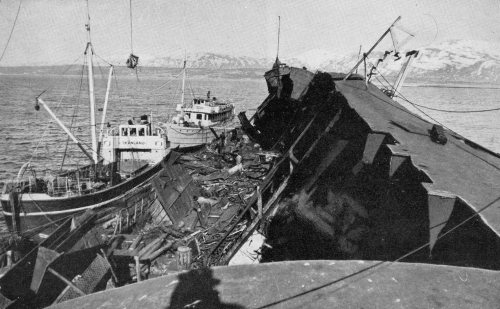 The wreck of the Tirpitz being broken up.

The Tirpitz in March 1944 while in Norway.