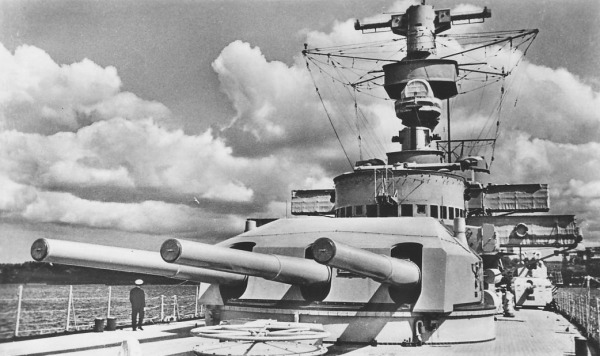 A view of the forward turret of the armoured cruiser Deutschland.

The Deutschland was the first ship of a new type known as Panzerschiff (armoured ship), referred to as "pocket battleship" by the British. The Deutschland conducted several non-intervention patrols off the coast of Spain during the Civil War (1936-1939). In 1937, while anchored off the Balearic island of Ibiza, the Deutschland was bombed by a Loyalist Spanish plane. This prompted the bombing of Spanish Republican positions off Almeria, by her sister ship Scheer in retaliation. In the days previous to the outbreak of the war in Europe, the Deutschland departed for the Atlantic to attack British merchant shipping, but was soon recalled on Hitler's orders and renamed Lützow for prestige reasons. An unlucky ship, the Lützow was torpedoed in April 1940, and again in June 1941 when trying to reach Norway. That kept the ship in the shipyard for most of the time during the first couple of years of the war. In 1942, the Lützow was sent to Norway, but her only real chance to engage the enemy at sea on New Year's Eve proved a failure. On her return to Germany, the Lützow was used as a training ship in the Baltic and for the shore bombardment of Soviet forces. In April 1945, while anchored in Swinemünde, the ship was bombed and later scuttled by the crew.

27 February 1933: Passes through the Kiel Canal en route to Wilhelmshaven.

20 May - 01 June 1933: Deutschland departs Wilhelmshaven for Kiel via the Skagerrak, and from there goes into the Norwegian Sea and the faroe islands, returning to Wilhelmshaven on 1 June.

August-September 1933: Conducts sea trials in the Baltic. On 23 August 1933, the ship performs a series of measured mile runs off Neukrug in the Bay of Danzig achieving a speed of 28 knots at 48,390 hp.

10-14 April 1934: Deutschland visits Hardangerfjord and Sognefjord in Norway with Adolf Hitler aboard, together with the Minister of Defence Generaloberst Werner von Blomberg, and the Commanders-in-Chief of the Army and Navy, General Werner von Fritsch and Admiral Erich Raeder.

06-20 October 1934: Visit to Edinburgh with Konteradmiral Rolf Carls aboard.

30 August 1935: Passes through the Kiel Canal en route to Brunsbüttel.

19 October - 09 November 1935: Training cruise in the Atlantic with her sister ship Admiral Scheer. Anchored in Funchal, Madeira on 25-28 October. Arrives in Wilhelmshaven on the 9th, via the English Channel.

29 May 1936: Participates in the fleet parade for the inauguration of the naval memorial at Laboe, near Kiel.

06-19 June 1936: Together with the Admiral Scheer cruise through the English Channel, Irish Sea, Orkney-Shetland Channel, Skagen, returning to Kiel.

24 July - 31 August 1936: Departs Wilhelmshaven together with the Scheer for operations in Spanish waters.

29 May 1937: Attacked by Spanish loyalist planes while anchored in Ibiza. Deutschland is hit by two 50kg bombs. The damage is slight but 37 men die.

22 August 1938: Participates in the naval review following the launching of the heavy cruiser Prinz Eugen in Kiel.

20 September - 20 October 1938: Atlantic cruise fully equipped for war due to the Sudeten crisis.

23 March 1939: Deutschland departs Swinemünde eastbound with Adolf Hitler aboard to be present in the annexation of Memel Territory.

01 April 1939: At Wilhelmshaven during the launching of the battleship Tirpitz.

FIRST WAR CRUISE IN THE ATLANTIC

24 August 1939: Departs Wilhelmshaven bound for the north Atlantic as a precautionary measure in case war breaks out.

28 August 1939: Transits the Denmark Strait into the Atlantic.

03 September 1939: The United Kingdom and France declare war on Germany following the German invasion of Poland on 1 September.

26 September 1939: The Deutschland is ordered to leave her waiting area and commence hostilities against British merchant shipping.

15 November 1939: After passing through the Skagerrak, the Kattegat, and the Great Belt, the Deutschland arrives in Gotenhafen and is renamed Lützow.

24-25 November 1939: Lützow together with the light cruisers Leipzig, Köln, and four destroyers, sortie into the Skagerrak to divert enemy attention from the battleships Scharnrhost and Gneisenau.

28 November 1939: Departs Wilhelmshaven eastbound for the Baltic via the Kiel Canal.

18-19 March 1940: Transferred from Swinemünde to Kiel with Emden and oiler Nordmark.

06 April 1940: Operation Weserübung. Lützow is assigned to Group 5, under the command of Konteradmiral Oskar Kummetz destined for Oslo. The ship embarks 400 soldiers at Wilhelmshaven, and later passes through the Kiel Canal en route to Kiel.

07 April 1940: Shortly after noon, Lützow arrives in Kiel where she is later joined by the heavy cruiser Blücher (flagship), the light cruiser Emden, and the torpedo boats Kondor, Albatros, and Möwe, from Swinemünde. Shortly afterwards, motor minesweepers R18 and R19 join the squadron forming Battlegroup 5. In the evening the group anchors in the Kiel Fjord.

08 April 1940: At 0300 hours, Battlegroup 5 weighs anchor northbound. During the night the German ships pass through the Great Belt and then reach the Kattegat.

09 April 1940: Shortly after midnight, Battlegroup 5 enters the Oslo Fjord. The Blücher leads the group, followed by the Lützow, Emden and the torpedo boats. At 0518 hours, as the Germans near the Drřbak narrows, the Blücher comes under fire from the Norwegian shore batteries (3 x 28cm guns) at Oskarsborg fortress. The cruiser is hit at short range on the port side. Blücher returns fire ineffectively. At 0530 hours, the ship is hit by two torpedoes on the port side. The Lützow is also hit by gunfire. One 15cm shell striking the central barrel of the forward turret that is temporarily put out of action. Unable to shoot back effectively and force the Drřbak narrows, the Lützow moves back and later lands her troops at Sonsbukten. Meanwhile, the Blücher finally capsizes and sinks at 0727 hours off Askholmen island with heavy loss of life.

10 April 1940: Lützow and Emden put in to Oslo. In the evening, the heavy cruiser departs Oslo for Kiel.

11 April 1940: At about 0200 hours, during the return voyage back to Germany, the Lützow is torpedoed by the British submarine Spearfish (Commander John H. Forbes) at about 12 nautical miles northeast of Skagen (quadrant AO 4462). The ship is hit by a 21-inch MK VIII torpedo and the stern breaks off damaging the rudder and propellers. Unable to steer, the ship is taken in tow through the Kattegat to Kiel. Casualties: 15 dead.

Night of 8-9 July 1940: During an air raid by British aircraft on Kiel, the Lützow, lying in the yard, is hit by a bomb that fails to detonate.

08 April 1941: A Japanese delegation from Japan's Naval Mission in Germany visits the ship.

09 April 1941: Departs Kiel bound for Gotenhafen to conduct sea trials in the Baltic.

10 June 1941: Operation Sommerreise. Transfer from Gotenhafen to Trondheim, Norway. In the afternoon, Lützow departs Gotenhafen and sails west to Kiel.

13 June 1941: At about 0220 hours, the Lützow is hit amidships on the port side (Section VII) by a 18 inch MK XII torpedo dropped by a British Beaufort aircraft (Flight Sergeant Ray Loveitt), 25 nautical miles west of Egersund (quadrant AN 3186).

16 May 1942: Operation Walzertraum. Transfer of Lützow from Germany to Norway. Departs Swinemünde escorted by destroyers Richard Beitzen, Z29, and escort boat F1. In the evening, destroyers Hans Lody and Z27 join the group off Kiel.

17 May 1942: After passing through the Great Belt, the Kattegat, and the Skagerrak, Lützow anchors off Kvarenes east of Kristiansand.

25 May 1942: Operation Lohengrin. Transfer of Lützow from Trondheim to Narvik. Lützow and oiler Nordmark arrive at Bogen Bay with destroyers Richard Beitzen, Z27, and Z29.

03 June 1942: In his capacity as Admiral Commanding Cruisers (BdK), Vizeadmiral Oskar Kummetz takes over command of the Narvik task force, and makes Lützow his flagship. The following units are now stationed in Narvik: Lützow, Admiral Scheer, and six destroyers. 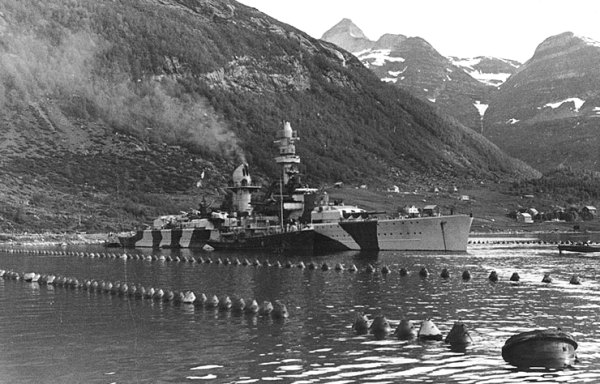 The heavy cruiser Lützow anchored in Bogen Bay near Narvik in June 1942.

02 July 1942: Operation Rösselsprung. At midnight, the heavy cruisers Lützow and Admiral Scheer leave Narvik under the command of Vizeadmiral Kummetz, together with destroyers Z24, Z27, Z28, Z29, and Z30. They are to join in Altafjord with the battle group from Trondheim under the command of Admiral Otto Schniewind and comprised of the battleship Tirpitz, the heavy cruiser Admiral Hipper, the destroyers Friedrich Ihn, Hans Lody, Karl Galster, Theodor Riedel, and the torpedo boats T7 and T15. Once in Altafjord their mission is to attack the convoy PQ17 with 36 merchantmen.

03 July 1942: At 0245 hours, the Lützow runs aground at the entrance of the Tjeldsund due to fog and returns to Narvik, eliminating her from the operation. The rest of the German battle group gathers in Altafjord, and although in the end the enemy is not engaged, its mere presence forces PQ17 to scatter resulting in the loss of 22 merchantmen at the hands of the Luftwaffe and U-boats.

09 July 1942: Lützow, destroyers Z24 and Friedrich Ihn, are transferred from Narvik to Trondheim.

12 December 1942: Lützow arrives at Bogen Bay on the afternoon with destroyers Theodor Riedel and Z31 (Galster having been detached to Trondheim).

30 December 1942: Operation Regenbogen. The heavy cruisers Lützow and Admiral Hipper (flagship), together with destroyers Friederich Eckoldt, Richard Beitzen, Theodor Riedel, Z29, Z30, and Z31, all under the command of Vizeadmiral Oskar Kummetz, depart Altafjord to intercept convoy JW51B that has been previously reported by U-354 (Kapitänleutnant Karl-Heinz Herbschleb).

10-11 March 1943: Operation Thüringen. Lützow is transferred from Altafjord to Bogen Bay together with destroyers Theodor Riedel, Z31 and minelayer Brummer.

23-24 March 1943: Operation Silesia. Lützow together with Tirpitz, Scharnhorst, and six destroyers are transferred to Altafjord.

23 September 1943: Operation Hansa-Hermelin. Transfer to Germany for a dockyard refit. In the evening, the Lützow departs Altafjord southbound together with the destroyers of 5th Flotilla Paul Jacobi, Erich Steinbrinck, Friedrich Ihn, and Z27.

25 September 1943: In the afternoon, Lützow and destroyers anchor at Skjomen Fjord near Narvik.

29 September 1943: Lützow group off Ven Island at 0800 hours. At 2000, when off Rügen Island, destroyers Paul Jacobi and Erich Steinbrinck are detached to Kiel. Lützow continues alone into the eastern Baltic.

10-15 October 1944: Lützow, together with Prinz Eugen (flying the flag of Vizeadmiral August Thiele), three destroyers, and four torpedo boats carry out support operations off the coast of Memel against the advancing Soviet armies.

23 November 1944: Sent to the Sworbe peninsula on the island of Ösel to provide shore bombardment against Soviet positions, but by the time it arrives the Germans have already been evacuated.

16 April 1945: Attacked by 18 Lancaster bombers in Swinemünde. The ship is heavily damaged by the near-miss of a Tallboy bomb and sinks in shallow water, but the hull comes to rest on an even keel with all superstructure above water.

04 May 1945: After expending all ammunition the ship is scuttled in Swinemünde. 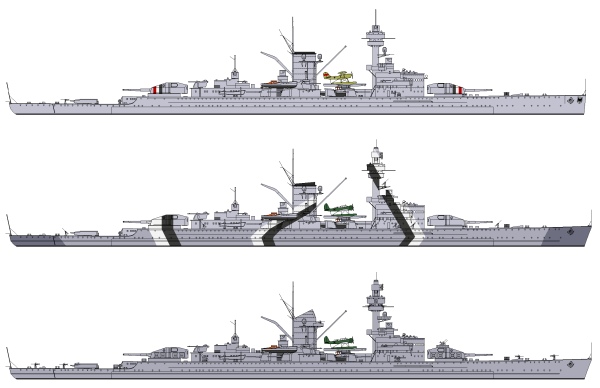