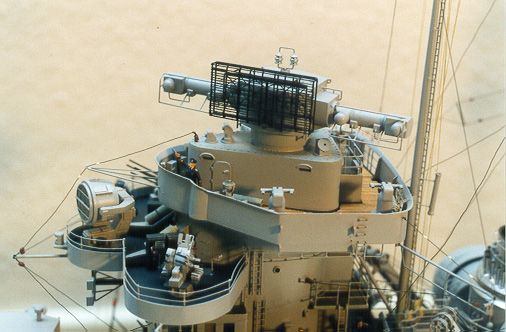 Detail of the foretop command post with the 10.5-meter rangefinder and the FuMO 23 radar antenna. 1/100 Model made by Markus van Beek.

The fire of the main and secondary batteries was directed from the command posts, which were located forward, astern, and above the foretop platform. Each of these three posts mounted a rotating dome with a stereoscopic rangefinder manufactured by Zeiss, and a FuMO 23 radar instrument. The command posts were connected by armoured communication shafts to the computation rooms (Rechenstellen) under the armour deck forward (section XV) and aft (section VII). The foretop command post, under the command of the First Artillery Officer (I.A.O.), was above the foremast, at about 31 metres above sea level. It was equipped with a 10.5-meter base rangefinder (Basisgerät BG) with a maximum 50x magnification, and had a visual field of 360ş. The forward command post was attached to the forward conning tower, and had a 7-meter base rangefinder, however, due to the superstructure, its visual field was smaller. The after command post had a 10.5-meter base rangefinder of similar characteristics as the one in the foretop.

Each of the four main battery turrets ("Anton", "Bruno", "Cäsar" and "Dora") was also equipped with a 10.5-meter base rangefinder, and in case all three command posts were put out of action in battle, the turrets could then proceed individually to local fire.1) However, the chances of scoring a hit with each battery firing on its own were obviously less than under a centralized command. The central turrets of the secondary battery also had their own 6.5-meter base rangefinder.

The anti-aircraft fire was directed from four command posts of the type SL-8, each equipped with a 4-meter rangefinder.2) Two of these command posts, covered by spherical cupolas (Wackeltopf)3), were on either side of the foremast, and the other two uncovered posts amidships aft.

Additionally, there were also two 3-meter night rangefinders on both sides of the Admiral's bridge.

Shooting methods were different on each navy and depended on the number and type of guns, the distance to the target, and the type of rangefinder utilized. In order to find the range as fast as possible, on the Bismarck it was customary to open fire with three partial salvoes in rapid succession, set at different ranges, so that all three were in the air at the same time. Let's say turret "Anton" first, two seconds later turret "Bruno", and then turret "Dora". After observing the fall of this first group, the Artillery Officer had to introduce the necessary corrections and usually with the second group the target was already straddled. Once the correct range and inclination was obtained, then they could fire full salvoes with all eight guns, or partial salvoes with either the fore or after turrets.

The FuMO 23 (Funkmeßortung) radar antennae, known as Matratzen, had a rectangular shape and measured approximately 2 meters high and 4 meters wide. They had a frequency of 368 MHz, and operated on an 81.5-cm wavelength with a power output of 9 kW at 500 kHz. The maximum effective range of this device was about 25,000 meters. However, the German FuMOs were not equipped with the PPI (Plan Position Indicator) display system that is so familiar in today's radars, but a simple A-scope display instead. Therefore, they could hardly detect more than one target at the same time, and bearings were not very accurate either. The lack of PPI was one of the reasons German battleships were so redundant and equipped with three sensors. 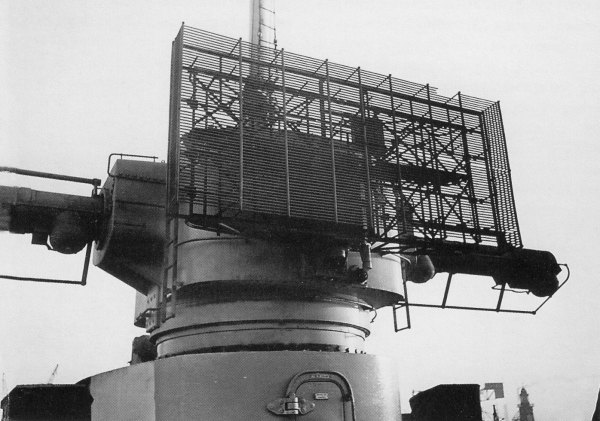 The aft rotating dome with the 10.5-m base rangefinder and the rectangular FuMO 23 radar antenna over its command post. This station was under the command of the Fourth Artillery Officer, Kapitänleutnant Burkard von Müllenheim-Rechberg.

The Bismarck was also equipped with two sets of hydrophones for passive underwater listening. The Germans called these installations Gruppenhorchgerät (GHG), and consisted of two panels of 60 microphones, one on each side of the ship's hull. The maximum effective range was 26-40 km depending on conditions such as water conductivity and background noise. Tests conducted in the Baltic Sea didn't give very satisfactory results because of heavy background noise and poor conduction properties. However, in the deep cold waters of the North Atlantic under favourable conditions, bearings with an accuracy of 1 degree could be expected at speeds of 30 knots from a distance of 30,000 meters (32,823 yards).

1) The 10.5-meter base rangefinder in turret "Anton" was removed in Hamburg during the winter of 1940/41, because its lack of utility due to sea water fogging at high speeds.

3) The Germans referred to this device as Wackeltopf which is German for the "Chinese wok" cooking dish, literally wobbly pot. It has been mistranslated in English by many authors as "waggletop".