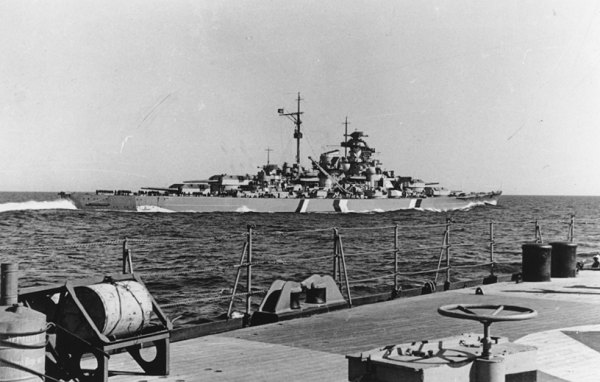 The Bismarck conducting sea trials in the Baltic as seen from the afterdeck of the cruiser Prinz Eugen in April 1941.

Immediately after the Bismarck was commissioned and the crew organised into divisions, full training began. This included guided tours through the battleship, anti-aircraft watch and combat training in the harbour to get familiar with the ship and to work together as a team. Air alarms, damage control and battle stations were the most common drills.

On 15 September 1940, the Bismarck departed Hamburg for the first time to conduct her sea trials in the Baltic Sea with her base in Gotenhafen (today Gdynia). The Baltic was a very secure place to conduct sea trials and exercises, and it was utilized by practically every single unit in the Kriegsmarine during the war. Its only entrance through the Skagerrak and the Kattegat was very well guarded and strongly protected by minefields. At 1658, while steaming north down the Elbe River, the Bismarck collided with the bow tug Atlantik, but fortunately neither vessel was damaged, and at 1902 the battleship anchored in Brunsbüttel Roads in order to enter the Kiel Canal the next day. During the night of 15/16 September, while anchored there, British aircraft appeared in the sky and the anti-aircraft battery of the Bismarck engaged them at once. More than 300 projectiles were fired by Bismarck, but no observable hits were scored on enemy aircraft. 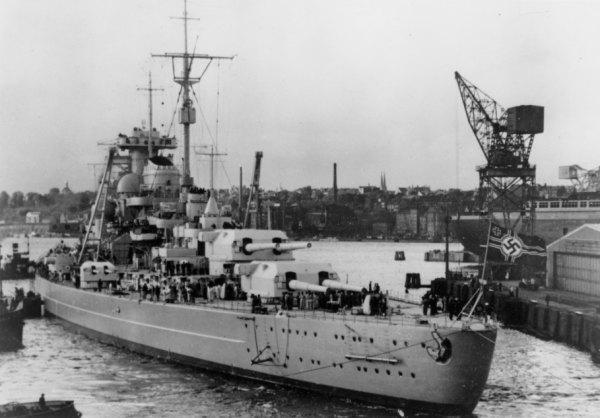 The Bismarck leaving the Blohm & Voss shipyard in Hamburg on 15 September 1940.