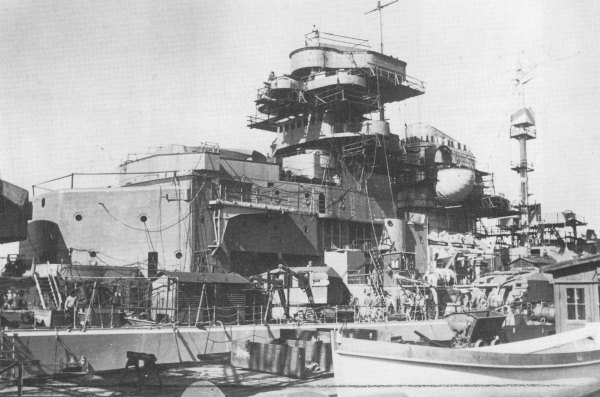 "In June 1940, when I first saw the Bismarck, she was in the Hamburg yard of her builders, Blohm & Voss, awaiting completion and acceptance by the German Navy. Therefore, what I saw was a dusty steel giant, made fast to a wharf and littered with tools, welding equipment, and cables."         MŁllenheim-Rechberg 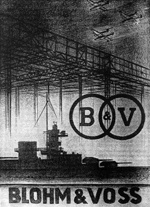 The keel of the Bismarck was laid down on 1 July 1936 at the Blohm & Voss Shipyard facilities in Hamburg, construction number BV 509, on Slipway 9. By September 1938, the hull was already complete to the level of the upper deck. The launching ceremony took place at 1300 hours on Tuesday, 14 February 1939, and it was attended by more than 60,000 people, government officials, military personalities, and yard workers. It was a nice day highlighted by sparkling sunshine. The Panzerschiff Admiral Scheer, the light cruiser NŁrnberg, the aviso Grille, and three boats of the 4th Torpedo Flotilla had gathered in the harbour. Photographing and cameras was not permitted among guests, and only official agencies were allowed to take pictures. Adolf Hitler and his party arrived at the shipyard on board the yacht Hamburg,1) and then the FŁhrer stepped up to the christening rostrum at the bow of the ship to deliver the customary pre-launch speech which was closed with the following lines:

"Twenty years ago, the fleet met its destiny and demise in the seas during four years of valiant combat, and this still touches the heart of every German todayÖ
Six years after the National Socialist revolution, we are witnessing today the launching of the third and largest battleship of our new fleet. As the FŁhrer of the German people and as chancellor of the Reich, I can give it no better name from our historical past than the name of the man who was a fearless knight in shining armor, the creator of that German Reich whose foresight has provided to us now with the means for the resurrection from bitter adversity and the wonderful expansion of the nation.
German builders, engineers, and industrial workers have created the towering hull of this proud giant of the seas. May the German soldiers, and the officers who one day will have the honor to command this ship, always be worthy of the name it bears. May the spirit of the Iron Chancellor be with them, may it accompany them on their joyful journeys in times of peace, and may it also, in times of peril, guide them in the hours of their utmost call-to-duty.
With these fervent wishes the German Nation salutes its new battleship Bismarck!Ē

"My FŁhrer, German men and women:
We thank the FŁhrer for giving this new ship of the Navy of the Third Reich the proud name of the great creator of the Second Reich. We are aware of the high duty this name embodies and we pledge to you, our FŁhrer, that the crew of this ship and the entire Kriegsmarine swears allegiance to this high calling and responsibility until its last breath.
We express our deep-felt thanks and our steadfast belief in Germanyís future, our unshakeable trust in our FŁhrer, by calling out to you: ďOur FŁhrer and supreme commander of the armed forces, Adolf Hitler, Sieg-Heil! Sieg-Heil! Sieg-Heil!"

The crowd joined in with enthusiasm. After a calm set in, the hull was christened by Frau Dorothea von Loewenfeld, granddaughter of the German chancellor Otto von Bismarck, after whom the ship was named.

Moments later, at 1334, the last breaking chocks were freed up, the hydraulic jacks began to push, and the cheers of the tens of thousands almost drowned out the sound of the German national anthem (Deutschland Łber alles) which accompanied the Bismarck in her glide down the launching ramp as she entered the water for the fist time.

The Bismarck was the last capital ship launched at the Blohm & Voss shipyard. The first battleship of the new H-Class was laid down on 15 July 1939, but construction was suspended less than three months later on 10 October, and finally cancelled on August 1941. After that, all the yard resources were focused on the construction of U-boats.

After the launching, the Bismarck was moored to the equipping pier where the boilers, turrets and all other parts of the superstructure began to be installed. The plates of the armoured belt were attached to the hullís sides. In addition, after the initial sea trials carried out by the battleship Gneisenau in the Atlantic, it was decided to replace the original straight stem with a new "Atlantic" bow that offered better sea-keeping capabilities and a different arrangement for the anchors.2) The war started in September 1939, but despite this and the hard winter that followed, the construction work continued as scheduled. 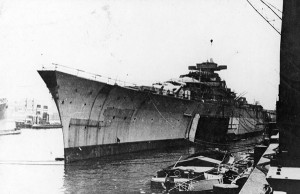 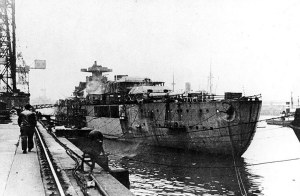 The Bismarck in Hamburg in December 1939.

In April 1940, the first members of the future crew began to assemble aboard, and with them the 46 year-old newly-appointed ship's commander, Kapitšn zur See Ernst Lindemann. The Bismarck was still completing, and these men started the first phase of training intended to get familiarised with the battleship's equipment such as the boilers, turbines, turrets etc. On 23 June, the Bismarck entered the floating dry dock No. V-VI where the three propellers and the MES (Mangnetischer Eigenschutz) magnetic self-protection system were installed. The keel was also repainted. The battleship got out of the dry dock on 14 July and then she was again moored to the pier. A few days later, on 21 July, the Bismarck underwent an inclining test (Kršngungsversuch), and in the ďempty ship as completed conditionĒ at 42,500 mt, a metacentric height (GM) of 3.9 metres was recorded. The crew, officially comprised of 103 officers and 1,962 non-commissioned officers and men, was still not complete, and new men came aboard gradually. Actually, they did not live aboard the Bismarck yet, and most of them were lodged at the barrack ships General Artigas and Oceana. 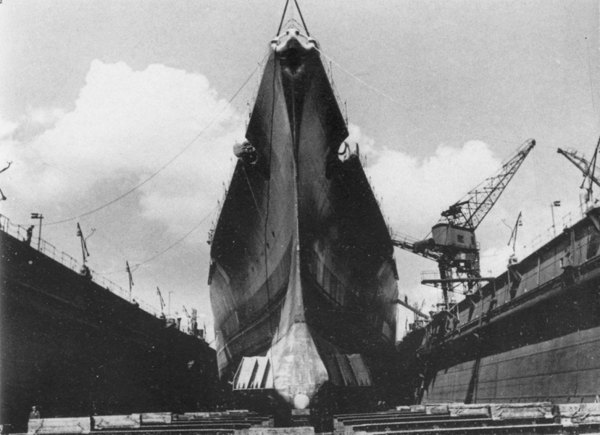 The Bismarck in dry dock June-July 1940.

The Day of Commissioning.

On Saturday, 24 August 1940, the ship was finally ready to be commissioned and enter in active service with the Kriegsmarine. It was a cloudy day, and the crew was formed on the upper deck waiting for Captain Lindemann to appear in order to begin the commissioning ceremony. Shortly before noon, Lindemann approached the battleship on a white captain's launch which carried the German battle flag. The Captain stepped aboard and proceeded to inspect the honour guard first, then the officers, and the rest of the crew thereafter. The Executive Officer (I.O.), Fregattenkapitšn Hans Oels and Kapitšnleutnant von MŁllenheim-Rechberg (at the time, adjutant to the commanding officer) escorted him. After inspecting the ship's company, Lindemann went to the afterdeck to say a few words and then gave the order to hoist the battle flag:

At this time the ship's band began to play the Dutch March of Honour (Hollšndischer Ehrenmarsch), and Master signal mate Franz J. Scharhag, who had the honour to carry the battle flag (Kriegsflagge) rolled up under his right arm, and another signal mate at the flagstaff, hoisted the flag. The band ended the ceremony with the national anthem, followed by the Horst Wessel Lied and the last verse of Englandlied. The battleship Bismarck was now in service and all the men were dismissed and ordered below decks.3) 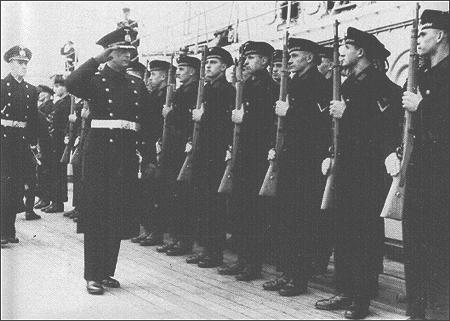 1) The yacht Hamburg was the official yacht of the Senate of the City of Hamburg and it was available for state visits and such.

2) Bismarck was launched with a straight stem, however the Tirpitz already had the Atlantic bow prior to her launching on 1 April 1939.

3) The complete transcription of Captain Lindemann Speech at the commissioning of the Bismarck is avaliable here.