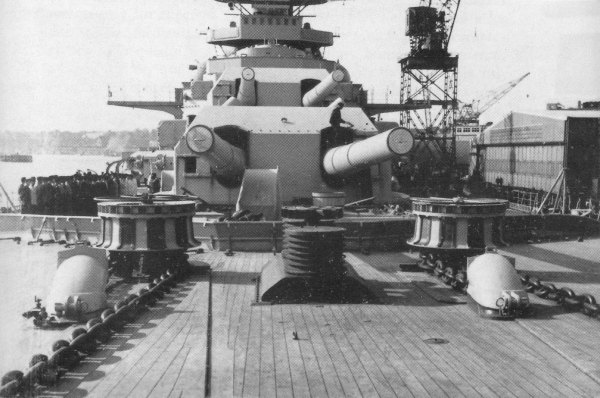 A view of the forward turrets "Anton" and "Bruno" from the forecastle. Summer of 1940.

Eight 38 cm guns comprised Bismarck's main battery. The principal purpose of these guns was to destroy surface targets at sea, although they could also be used for shore bombardment and, exceptionally, against aircraft. Designed in 1934, the 38 cm SK C/34 were the most powerful guns ever mounted on a German warship. These were housed in four armoured twin turrets alphabetically arranged from forward to stern. Thus, turrets "Anton" and "Bruno" were located forward (frames 192.55 and 174.35), while turrets "Cäsar" and "Dora" were aft (frames 64.35 and 46.15). Each turret weighed 1,056 metric tons, and was supported on a roller track platform. Below there were a series of levels that extended from the upper deck down to the bottom of the ship. The turrets were especially big compared with 38 cm twin turrets of other foreign warships, and the barrels were very separated from each other, therefore reducing interferences between them. Each gun barrel could fire and be elevated independently of the other. A special characteristic of these guns was their high muzzle velocity and low shell trajectories with a short flight time, which permitted to obtain a very accurate and rapid fire. This was fully demonstrated in the morning of 24 May 1941 during the naval engagement with the British battlecruiser Hood.

38cm Psgr. L/4,4 (m.Hb), Panzersprenggranate L/4,4 (mit Haube). These were Armour Piercing (AP) shells, base fused with windshield (mit Haube), and were painted in blue colour. The task of the armour piercing shells was to penetrate armoured plates of heavily protected targets such as battleships and detonate in the interior causing severe destruction to vital parts (boilers, magazines, etc). If used against light or unarmoured targets/surfaces, AP shells would simply penetrate these and pass through exploding beyond the target or without even detonating due to the insufficient resistance to activate the fuse. A total of 93 projectiles of this type were fired at Hood and Prince of Wales during the battle of the Denmark Strait on 24 May 1941.

38cm Spgr. L/4,5 Bdz (m.Hb), Sprenggranate L/4,5 Bodenzünder (mit Haube). These were High Explosive (HE) shells, base fused (Bodenzünder) with windshield, and were painted in yellow colour. The penetrating capabilities of the high explosive shells with base detonating fuse were inferior than those of AP shells, however the effects of the detonation were greater since HE shells contained a larger explosive charge. This type of projectiles was utilized against relatively lightly armoured targets such as cruisers.

38cm Spgr. L/4,6 Kz (m.Hb), Sprenggranate L/4,6 Kopfzünder (mit Haube). These were High Explosive (HE) shells, nose fused (Kopfzünder) with windshield, and were painted in yellow colour with a black arrow pointing at the nose to differentiate them from base fused shells. The principal effect of high explosive shells with nose detonating fuse was the action of splinters due to their large explosive charge. Nose fused projectiles had very limited penetrating capabilities and were intended to be used against soft targets such as destroyers or merchantmen.

Click here to see the range and penetration table for the 38 cm SK C/34.

1) The quadruple 2 cm Flak C/38 mounts situated on both sides of the foremast above the searchlight platform were installed in Gotenhafen in late April 1941.